Maymun and Mahamed's fled the civil war in Somalia with their families when they were children and found refuge in Ethiopia. They were the first in their families to receive a university education.

In Ethiopia, they each received a DAFI Scholarship that enabled them to obtain their undergraduate degrees.

They are now among the first Somali refugees in Ethiopia to receive the University Corridors Programme (UNICORE) scholarship, which will allow them to pursue master's degree programs at the University of Florence.

The UNICORE scholarship, promoted by 24 Italian universities with support from UNHCR, the UN Refugee Agency, the Italian Ministry of Foreign Affairs and other partners, offers them a rare opportunity. Even though there are a number of scholarships available for refugees, very few are actually accessible. Many refugees, having fled with almost nothing, lack documentation, such as passports as well as academic records from their home countries with official translations.

Maymun, who is pursuing a master’s degree in geography, hopes that she is viewed as a role model in her community by demonstrating the impact of education on girls and the positive impact education can bring to the society.

“What I want most is to change how the education of girls is perceived,” says Maymun. “I want people to understand the importance of it.”

Education is an emancipator for refugee women and girls, enabling them to take control of their lives and future and to participate in the society on an equal footing with men. According to the Malala Fund, girls who receive an education are more likely to have healthier families and contribute to building more resilient and stable societies.

As Maymun waited to receive her EU digital COVID certificate, she found herself isolated for the first weeks in Italy when the pandemic hit. She couldn't go to class and couldn't visit any public indoor spaces until she received the Green Pass. She is studying Italian. 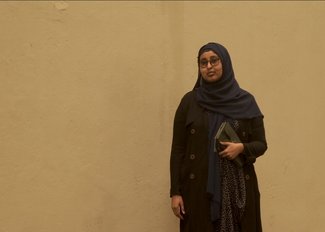 “Here it is important that you know the Italian language and I do not know the language so it is very hard to make friends.” Says Maymun.

He worried that he would have a difficult time adjusting to a new country.

“To be honest, I never thought it could be easy for me to come to Florence,” Mahamed says. “I found that many of my hopes and dreams could soon become true.”

“The first step I took with my dream was to look for the door,” says Mahamed “When you are here, you can say you have a good future in your hands.”

The eldest of seven siblings, Mahamed feels responsible for his brothers and sisters and his family sees this as an opportunity that would change their lives.

His peers, who had initially been doubtful of the legitimacy of scholarship programs, are inspired by him. Since his departure, he has received many requests from friends in Ethiopia asking for scholarship links so that they, too, can further their studies. Additionally, fellow Somalis who got to Italy through irregular means are inspired by him and surprised to learn that there are legal pathways to get to Europe.

Both Mahamed and Maymun hope to be change-makers and have the opportunity to contribute to rebuilding Somalia one day.

“If the situation in Somalia gets better, then I’d like to return to my country,” says Maymun. 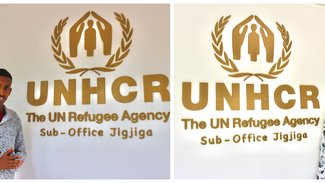 For two refugee students in Jijiga, Ethiopia, a scholarship opportunity is about to change their lives. Against all odds, and with the support of their families and communities, they have an opportunity to embark on a new journey that will transform their lives and their community.