Abdirahim embarked on his irregular journey in 2014 with the objective of getting to Europe. Despite his awareness of the dangers that come with such journeys, he was willing to gamble with his life and try, hoping to be one of the people who succeed in making it.

“What many see is the number of people making it through the dangers to safety,” he says.

In July of 2014, Abdirahim set off on a perilous journey from Sudan to Libya. Over the course of the journey he learned not to trust anything the smugglers said.

The smugglers had initially informed them that they would board big ships, but when they reached Tripoli they were forced to board inflatable boats. At the time, getting on the boats seemed the only choice. War was raging in Tripoli, making the treacherous sea a welcome option.

“Libya was in turmoil… there was shelling and weapons being fired, such as RPG rocket launchers.” He says. “You couldn’t look back or think of staying.”

Watch as Abdirahim recounts his journey through Libya 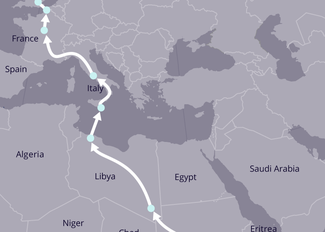 Abdirahim boarded a boat together with approximately 500 other people, aware that they were too many— making the journey feel even more precarious. Luckily, the boat got to Italy without incident.

Once in Italy, Abdirahim made the decision to move on and try to get to England. Despite his limited knowledge of the country, he assumed more opportunities would be readily available there. However, his attempt to get to England proved more difficult than imagined.

“Having crossed the sea, you find yourself facing yet another sea. It is not less challenging than the first one,” he says.

Abdirahim found himself, together with hundreds of other migrants and refugees, in Calais, a port city in France. It was a place he never thought could exist in Europe, where people slept in tents and led lives he describes as equal to those of wild animals. In the evenings, Abdirahim and the other refugees and migrants would try to get onto trucks that could transport them to the UK. They often found themselves clashing with the police, who beat them and occasionally sprayed them with tear gas.

Watch Abdirahman talk about his time in Calais.

After many futile attempts, Abdirahim succeeded in reaching the UK.  Reflecting on his journey and struggles, Abdirahim doubts he would have made the journey had he known about the challenges he would encounter. Today Abdirahim lives in the city of Leeds in the UK. He has been granted asylum.